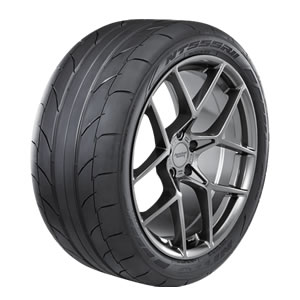 Track and competition tires are designed for racing enthusiasts to maximize performance on racetracks, while some are also suitable for street use.

Nitto NT555RII is a D.O.T.-compliant competition drag radial designed with additional flexibility for the weekend drag racer. The high-grip compound and semi-racing construction provide increased traction at the starting line, while the large circumferential grooves aid wet handling on your way to the drag strip. Nitto NT555RII drag radial works in unison with Nitto NT555G2 tire, so you can put the drag radials on the driven axle and the NT555G2's on the non-driven axle. When developing both product lines, Nitto matched the tread pattern and sizing to fit modern performance vehicles. NT555RII features race compound for increased traction at the starting line. The sidewall construction has been modified to improve launch for better lap times. The large twin center ribs provide a continuous contact patch for dry traction.